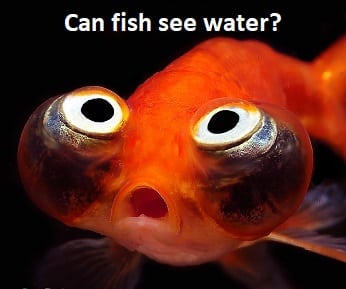 It is a baffling question if you come to think of it. Since you are not a fish, how can you tell? Fish can obviously see in the water. If they can't they would be bumping into each other and crashing on rocks and corals all the time. But can fish see the water they are in? No, fish do not see water. Instead they use their various body parts to sense changes in the water. This is often mistaken for them seeing the water because it can cause the fish to move in a different direction when they sense a change.

Quick Navigation
What do fish see?
can fish see outside their tank?
Facts about fish eyes

What do fish see?

Imagine yourself to be a fish inside a tank or aquarium. You are in the water. You don't see the water. You can feel the water and the movement of the water. These are what your lateral lines are for. They are sensors. They send signals to your brain that there is movement on the water.

Fish that live near the deep, deep dark ocean floor can see nothing. They're not blind (maybe they are) but the thing is, no light can reach that far down. Most of the fish that live near the ocean floor depend on their sensors to guide them and give them directions where to go and what to avoid. Instead of seeing objects in front of them, their sensors, their lateral lines can gauge changes in water pressure and current flow. So they are able to navigate in the dark. Humans need light to navigate in the dark. This is why we invented torches and flashlights. If you drive a car at night without headlights, you might crash into a tree or another car.

can fish see outside their tank?

You have probably looked down a fish tank and seen fish scamper at the sight of your face. You scared the plankton out of them! Proving to you that fish can see objects above the water. But how much can they see? Ask a fish and he'll probably explain to you Snell's Window... in fish talk! Snell's window is a window through which fish can see what is above water. It's similar to bird's eye view only a lot smaller and the other way around. Bird's eye view looks downward, Snell's window looks upward. Snell's window allows fish to see what's above the water only from about a 96 degree angle. It's like looking up through an inverted funnel or cone.

So if you don't want a fish to see you, stay away from Snell's window! Outside of Snell's window, the fish can only see a reflection of what lies below.

Fish eyes are a lot similar to human eyes. They are made much the same way. They have the same parts: the cornea, the pupil (iris), lens, and retina. The cornea is where light passes into the eyes. It limits what you see or your field of vision. Try raising your hands up, a little bit behind your ears. Can you see them? If you were a fish, you'd be able to see them, not only because their eyes are on the side of their heads, but because fish have a wider field of vision. And bulging eyes. The longer a fish hangs out in the deeper and darker part of the ocean, the more its eyes bulge and pop out of its sockets. The cornea of fish acts much like your goggles would to you. The way their cornea is built enables them to see through water clearly.

The pupil controls how much light goes in. It opens (dilates) and closes (constricts) depending on how much light it sees. Try to look at a bright light (the sun). Doesn't it make you squint? Just like your pupils -- it squints when there is too much light. In the dark, your pupils open (dilates) to allow more light to enter. Fish don't need this ability too much because when light enters the water, it's already distorted. Have you looked closely at a fish's pupil? It's like a fixed stare.

Have you noticed a fish's eye at night? Haven't you asked this question before: Do fish sleep? If they do, why are their eyes open? Funny but fish can't close their eyes (like you) because they have no eyelids. What fish do when they sleep (yes, they do sleep) is pull their iris up inside its socket to minimize the entry of light while they sleep. Ever tried pulling your eyeballs like a fish showing only the white parts? That's scary!

Then we both have retinas at the back of our eyeballs, Our retina makes us see color by day, and shapes and silhouettes by night. Our eyes shift from one function to another depending on the amount of light available. Do this: stand by the light switch in your room. Look at the objects in your room and note their colors. Switch off the light. If your room does not turn pitch black (absolutely no light) count how many seconds it takes for your eyes to again see the shapes of the objects. But do you see any bright colors?

Fish that live near the surface see more color. Their retina are adapted to more light. Those that live in the middle of the ocean see less color but recognize distinct shapes and sizes because there is lesser light at this part of the ocean.

If your room turns pitch black, switch on a UV light (black light), you'll be surprised at what you will see. This is how the retina of some fish that live near the ocean floor, more than 12,000 feet deep, see in absolute darkness.

So you ask: Can fish see water? I bet the fish will ask you in return: Can humans think of a better question to ask!?