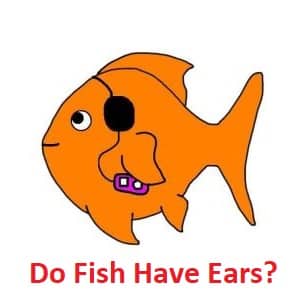 If you look at a fish, you can quite clearly see that they do not have ears like us. This is just as well. It would be rather funny to see fish dashing through the water with land animal-type ears on them, wouldn't it? Of course, fish do still need to hear. The water is a dangerous place, even for the largest of fish. They need to be 'at one' with their surroundings, or it could mean death. So, that is what we are going to take a little look at on this page. We want to talk to you about whether fish have ears and, perhaps more importantly, how do fish hear?

This is a rather complicated subject, but we are going to try and ensure that it is as easy to understand as possible for you.

Quick Navigation
Sound moves differently through the water
Do fishes have ears that are visible?
How do fish hear?
How Otoliths Work
Lateral line
Swim bladder
Conclusion

Sound moves differently through the water

To understand how do fish hear, it is probably worth talking a little bit about how sound moves through the water.

We are positive that you have put your head underwater before, right? If you have, then you will know that it doesn't sound quite right. It is just quite muffled. You may be able to hear a few things but, for the most part, your ears would struggle to make anything out clearly. This is because your ears haven't evolved to hear anything underwater.

Sound underwater travels five times faster than it does on the land. This is due to water having a heavier density than air. Sound is (essentially) the vibration of particles. As sound travels, the particles knock into one another. Since there are more water particles in an area than air particles, it is easier for them to knock into each other. This translates to faster sound movement.

So, why can't we hear properly underwater? Well, it is because of what our eardrums are made of. They are mostly water. Without getting too technical (we will soon), the sound will simply travel through the eardrums because of this. Instead, it will hit a bone a bit deeper in the head. This bone will still absorb the sound as the eardrum would, but it would sound completely different. It is vibrating in a slightly different way. This means the sound would be different on land to water.

So, this means that fish simply can't have the same ear set-up that humans have. If they did, they wouldn't be able to hear a thing underwater. If they could, it would be muffled. The fish almost certainly wouldn't be able to tell which direction a sound is coming from. This, of course, would be fatal to the fish. They would be easy prey.

This doesn't mean that fish can't hear, though. They can. They are just better adapted for listening underwater. If you took a fish onto land, they probably wouldn't be able to hear a thing!

It is probably also worth pointing out at this point that fish will have a slightly different ear set-up depending on where they live. This includes the depth of water they are in, as well as the temperature of the water. We are not going to go into the specifics on this page. Instead, when we answer the question 'do fish have ears?', we are going to be speaking in slightly more general terms.

Do fishes have ears that are visible?

On some species of fish, there may be two very, very small openings on either side of their head which allow sound to travel in. However, even if you had a fish in your hands, you wouldn't be able to look into those holes and see the inner ear like you would be able to with another human. It is completely blocked. The only way that you can see the actual ear set-up of a fish is to dissect it.

If you opened a fish up, you would be able to see a pair of bones in their head. These bones are known as otoliths. We will talk about them more in a while. However, we do want to mention them now. This is because they are incredibly important for determining the age of a fish. Each year a fish is alive, the otoliths will get slightly bigger. Each time they get bigger, a ring will form on these bones. So, when they are extracted from a fish, we can count the rings and determine exactly how old the fish is. This isn't related to whether fish can hear or not, but it is interesting to know that the hearing system of a fish can also be used to determine how old that fish is.

How do fish hear?

This is going to be dependent on the fish. Some fish will have slightly different set-ups. They all involve a bone being vibrated, though.

We should probably point out that it is unlikely that a fish can hear the same things that we do. While they do have good hearing, their brain is probably not processing the sounds the same way that we would process the sounds. They just look out for certain frequencies or vibrations, and that is what they relate to. Of course, nobody can currently say exactly what a fish will hear, but most marine biologists doubt that it is anything too complicated.

Three components will make up how a fish hears. Although, do bear in mind that not all of these components are present in all fish. Some fish may also have all three components (these fish are much better 'listeners') 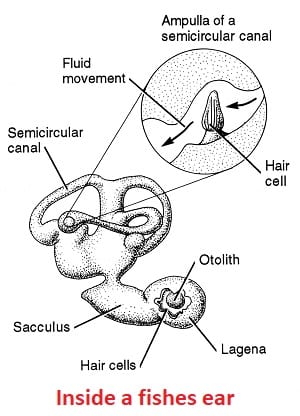 For almost all fish, they will be doing most of hearing through the otoliths (sometimes known as ear stones)

As we said before; otoliths are small bones located in the head of the fish. As we also mentioned before; fish can't have eardrums because the sound will just pass through them as they are packed full of water. The otoliths are not.

When there is sound in the water, the vibrations will be set into the head of the fish. The sound waves will continue to travel until they hit the otoliths. Once the otoliths receive the sound, they will vibrate. The brain will then process these vibrations, much in the same way our brains process the information sent to them by our eardrums.

How sensitive the otoliths are will be dependent on the fish. The fish will have a rough indication of where a sound is coming from (the direction), but they may not be able to understand the distance the sound is coming from. Thankfully, they have other 'hearing' systems in place for that.

All fish have something known as a lateral line. This is a complex set of organs that plays a central role in a lot of different behaviors of a fish.

The lateral line can't hear as such. It does pick up on soundwave frequencies, though. It can allow a fish to 'hear' where other fish are in their environment. It enables predators to sense where their prey is, and it enables prey to sense if there is something untoward in the area. The lateral line can give the fish an idea of where the soundwaves are coming from, and it enables the fish to react. It is much more sensitive than the otoliths in that regard.

Finally; some fish will have a swim bladder.

The swim bladder can vibrate in the same way that the otoliths can vibrate. The vibrations in the swim bladder (which is highly sensitive) will be sent up a series of bones. It will then reach the ear system and vibrate that too.

Many people have likened having a swim bladder as having a hearing aid connected. All of the sounds around the fish are going to be that much more amplified. They can make out sounds a lot better, and often from a lot further away. Fish who have a swim bladder are some of the best 'listeners' in the water. They can hear almost everything. Carp are fish who have very, very sensitive swim bladders. They are regarded as having some of the best ears in the fish world. This is why, when you are fishing for them, they are likely to be startled by even the smallest of noises.

Only bony fish will have a swim bladder.

Fish do hear music, but not in the same way you and i hear music. They hear music as vibrations though the water like sounds waves, which is why if it's too loud it can stress them out. Even though in Finding Nemo they seem to enjoy music!

So, can fish hear? Yes, they can! They have ears that are built for underwater listening.

When it comes to how do fish hear, they are (mostly) just picking up on vibrations in the water. It is likely difficult for them to make out distinct sounds, but how they pick up on frequencies will give them a decent read on their environment. How the fish hears will be dependent on the fish and where they are located (a deep-sea fish will pick up sounds differently to one located closer to the surface)

All you need to know is that fish can hear the sounds around them. They do have the ability to process sounds. It is important to their survival!