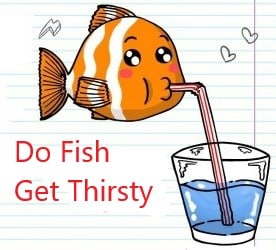 You've gone thirsty before, right? I bet you have. Depending on how thirsty you are, you usually drink water to quench your thirst. If the weather is hot, you drink more frequently than if it was cooler. To avoid dehydration, adults say.

You've probably also seen your pet dog on a hot day, panting with its tongue hanging out. And you can tell your dog is thirsty. Watch how he'll lap excitedly on his water bowl when you pour water in it or on a water hose when you offer it to him. But have you ever wondered about fish, if they ever get thirsty. Have you ever asked the question, Does a fish get thirsty?

So, does a fish get thirsty? No, a fish does not get thirsty. It sounds simple, but it's more complicated than that. Fish don't feel thirst in the same way that you and I, and our pet animals (like dogs, cats, horses, birds, etc.) experience thirst.

When you say you're thirsty, it's your body telling your brain about the lack of water and triggers the urge to fill it. When you've filled the lack, with a glass or two of water or fluids, you say that you're thirst has been quenched, and you feel refreshed.

The same is true for your pet (four-legged and two-legged) animals. But fish don't get thirsty. And you may be right in thinking, "How can fish ever get thirsty when they live all their lives in the water?!" Now, let's swim deeper into the aquatic life of a fish and see how fish interact with the water it lives in, and find out more.

Quick Navigation
Do fish drink water?​​​​​
The balance of salt and water.​​​​​
Fresh water fish.
Salt water fish.
Do sharks drink water
Adaptability of other fish.
What does a thirsty fish look like, anyway?

There is a reason for this, and it has little to do with their feeling thirsty or not. Can't really tell if fish ever feel thirsty unless you ask one, right? But from the looks of it, they never appear thirsty, ever. But why do they drink or not drink water?

Have you ever seen a high-wire act? It's where a professional acrobat walks on a tightrope (high-wire) way above the ground, sometimes holding a long pole in his hands across his body, sometimes just walking with his arms extended sideways. It's a delicate balancing act -- the acrobat can fall on either side, on the right or on the left. But happily he doesn't.

Our fish also walks (oops, swims!) a tightrope, On the one hand if it gets too much water in its body, if it drinks too much water its blood will get too diluted. Remember, fish blood is a little salty. A liter (1,000 ml) of fish blood contains some 2 teaspoons (9 grams) of salt. These salts (sodium, potassium, calcium) are important in regulating a fish's heart, nerves, and muscles. That's right. So, if the fish's blood gets diluted with excess water, it will make the fish weak. On the other hand, if it gets too much salt in its body, the fish will suffer from dehydration because the excess salt will attract water molecules. It could shrivel and die. This all happens as the fish interacts with the water it lives and swims in. That's why it's very important for fish to constantly keep a balancing act.

Let's work this out. It will help us if we think of fish belonging to three different teams. The first team is fresh water fish. Then, salt water fish, or fish that live in the sea. Then, lastly, sharks. But try not to forget that the fish's body is always trying to achieve the salt and water balance to remain alive (instinct), or for its continuing survival. Let's look at them one by one.

Fresh water fish have more salt in its body than the water it swims in. If it continuously drinks or absorbs fresh water, its blood will get too diluted (already mentioned above). What does the fresh water fish do? In order to survive, fresh water fish have adapted to its aquatic environment by not drinking water. See? Not all fish drink water. Or if it drinks or absorbs water, which is quite unavoidable because it lives in water, its gills have developed a mechanism to trap whatever salt is present in the water. It reserves this salt to help maintain its body's salinity (saltiness). Fresh water fish also developed kidneys that excrete a very diluted urine, which eliminates more water than salts.

So, do fish drink water? Fresh water fish don't. And if they do, it's not because they're thirsty!

Salt water fish have less salt in its body than the sea water. Sea water is four times more salty than fish or fish's blood. What happens to a fish if the water it swims in is four times more salty than its body? It loses water to the sea, and the result is the salt in its body increases in concentration. This will lead to dehydration. So, the fish needs to drink (instinct) in order to regain the water it loses. But all it can drink is salt water. Won't this add more salt to its body?! Yes, it definitely will.

But the wonder of nature! Marine (sea water) fish have gills that process and eliminate salt. One problem solved. Also, they have kidneys and rectal glands that get rid of excess amounts of salt in the body. The urine of salt water fish is very concentrated with salts. This is how salt water fish maintain the salt and water balance in its body and survive in the salty waters of the seas and oceans.

Then, the shark. What's unique about the shark? According to scientists, the shark's body is more salty than the sea (true also for other cartilaginous fish). Therefore, a shark can drink all the sea water it wants and still maintain its salt and water balance without suffering any health problems. Not really, just kidding.

The truth is, sharks don't drink water. They don't need to drink water. Because their body is more salty than the sea, pure water flows into the shark's body through its gills via osmosis. Osmosis is water flowing from a higher concentration (less salty) to a lower concentration (more salty). Since the shark's body is more salty than the sea water, it draws pure water in. The shark doesn't literally drink it.

Adaptability of other fish.

Some fish like salmon have the ability to survive in fresh water while young and continue their lives until maturity in the sea's salty waters. They have developed the ability to regulate osmosis as they adapt to the salty environment.

Different fish have different capacities to adapt to the salinity of their environment. Some would have a hard time achieving the delicate balance of salt and water in their bodies, while others have evolved to adapt.

So, we've seen how fish maintains the delicate balance of salt and water in their body. In the case of humans like you and me, and our pet animals (four-legged and two-legged), we have the bodily mechanism of thirst and the urge to drink water. We manifest obvious physical signs of thirst.

We asked the question, Does a fish get thirsty? and returned a negative answer. No, a fish doesn't get thirsty. It's mechanism of keeping the balance of salt and water is dictated by internal signals and instinct. You also just can't imagine them getting thirsty because they were born in the water and live all their lives in the water.

We also asked, Do fish drink water? We answered, yes, some do, but some don't. Those that do, do so not because they feel thirsty (maybe they do feel thirsty, but we can never find out how they feel) but because their fish brains sense a need to balance out the salt and water equation to survive. Those that don't also don't drink because their fish brains know that too much water will dilute the salinity of their blood and make them weak. Others that don't drink, like sharks and cartilaginous fish, don't do so because pure water flow through them via osmosis.

Now, what does a thirsty fish look like, anyway?