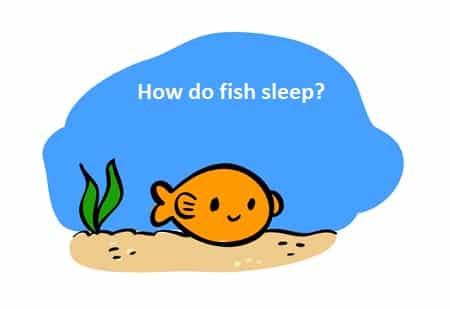 Like almost everyone on earth, we love a good night’s sleep. It provides us with the reboot we need to get our energy levels back and start our days fresh, alert, and recharged.

In almost all corners of the earth, humans sleep in the same way. We close our eyes and count sheep. Sooner or later, we are out for an average of 6-8hrs.

Wrapping yourself up in your comfortable, warm blanket, stretching your arms and toes and then dozing off into another world should be the 8th wonder of the world.

Well, luckily for you, you can stick to your warm, comfortable bed. But for animals all around the world, nature is their home day and night. We found ourselves asking some questions about the sleeping habits of our pet fishes.

Have you ever noticed your fish sleep? Do they close their eyes? Do fish snore? Do fish dream while they sleep? Well, thanks to a little research, observation, and science, we can answer those questions for you.

Starting with, yes, fish do indeed sleep. They don’t follow the sleep patterns we do, but we are sure you will find some interesting facts about your pet fishes sleeping habits, just read on.

How do fish sleep in a ​tank​?

It isn’t the easiest thing to spot when a fish is sleeping; after all, they don’t exactly snore. There aren’t many tell tales signs either like we see with other creates, e.g. closing of eyes or rapid eye movement (REM) type sleep.

However, there are some things you can look out for which will let you know when your fish is… well, sleeping with the fishes.

The main give away is that fish become very inactive, now there are different levels of inactivity one can judge by, and this usually changes by species, but the level of activity often drops quite noticeably from how they typically behave.

They will likely stay in the same position, and you will notice their breathing movements will slow down quite a bit as well. It is almost like they have reached the optimal state of zen.

When sleeping, fish will stay upright but usually towards the bottom of the tank. This can seem a bit scary if you are a first-time fish parent, but don’t panic. More than likely if your fish friend is hovering near the bottom of his tank, he is just taking a rest.

When we keep fish as pets, they can follow the same sleeping patterns we do. They will sleep through the night when the lights are off and stay active through the day. Their sleep patterns tend to be more of a short rest period, followed by levels of activity.

This isn’t the same for all fish though, depending on the type of tank, fish, and coral you have you could see different sleep behavior from your fish. Some may retreat into the coral in the night to have their rest.

This is an instinct fish in the ocean follow to keep them safe from predators. You should also take into consideration the type of fish you have; some fish don’t sleep through specific periods in their lives.

We aren’t exactly sure why fish rest in this way, but scientists assume, just like humans, fish need to rest their bodies and gather back their energy.

Scientists studied the sleeping patterns of zebrafish who were sleep deprived around the times they would usually rest. What they found is that the fish were much more fatigued and had slower breathing patterns.

It just proved that more than likely, the reason fish sleep is to recuperate their energy levels.

Do fish sleep with their eyes open?

As humans, our eyes are always in contact with the air which dries them out. Fish, on the other hand, do not have this issue…Since they live underwater.

So, don’t judge your fishes sleeping time by whether or not they have their eyes open.

Do fish sleep while swimming

Fish need to move to some degree while sleeping or resting as it allows them to breathe. As you may know, fish breathe by extracting air particles from the water they pass over their gills.

To keep breathing, they need to keep moving. Some species will require more or less oxygen, and bigger fish may also need more oxygen. So yes, fish do sleep while swimming, just not as fast as when they are awake.

Usually, when sleeping, though, as with humans, their heart rate and physical requirements slow down, so they use less oxygen. Which means they can swim at a slower pace and for smaller varieties of fish they can even hover with a few small fin movements here and there to tread water over their gills.

You may be amazed to know though; Dolphins are a little different. Although technically an aquatic mammal, dolphins sleep while still swimming. They can do this by switching off half of their brain to rest while the other stays active.

This allows them to keep swimming at a slower than usual pace while also being able to keep track of things and objects around them. This type of sleep is called hemispheric slow wave sleep.

Although scientific studies are being done all the time to understand more about animals and how they live, one thing we do not know yet is whether fish dream or not. Most people experience dreams when they are in REM sleep.

Fish cannot achieve that level of sleep. In the ocean, they need always to stay alert even when they are resting. The sea is full of predators. With this in mind, we can assume that fish sleep very, very lightly, which could mean they never dream.

As more studies are being undertaken though it is exciting to learn more about the sleeping habits of animals in their natural habitats.

Fish sleep studies are ongoing all the time, and as more information comes to light, the more we are learning about how fish sleep and why fish sleep in the way they do.