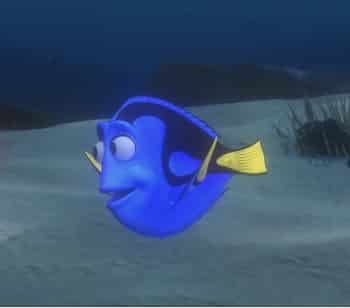 Whether young or old, Finding Nemo is a much loved movie. With all movies we all tend to have a favourite character. Dory always stands out as one of these characters, so much so that she gained her own movie as a follow up to the initial movie. Did you know that Dory is based on a real life fish? So what type of fish is Dory? Dory's character is based on a fish called a Regal Blue Tang. Also known by their Latin name which is Paracanthurus hepatus. Other common names also include the palette surgeon-fish, hippo tang, flag-tail surgeon-fish and the blue surgeon-fish. Dory's voice is played by the famous talk show host Ellen DeGeneres

Whats tends to stay in our memory is Dory's striking coloring. This is very typical of the Regal Blue Tang. The bright blue coloring and black patches with the awesome yellow tail and pectoral fins. This coloring is the first aspect the movie depicts very well.

How true to life is dory from finding nemo

So how well does the movie share the characteristics of the real life Regal Blue Tang? Well firstly, it would be quite unusual to find a single Regal Blue Tang on it own. They are quite social fish often found in at least pairs but can be found in shoals of up to 15 fish. They will also live fairly amicably alongside other species, though they do not appear to mix very well with other surgeon-fish.

Regal Blue Tangs enjoy life around a coral reef so it is no surprise to see Dory bumping in to Nemo's dad, the Clown fish, as this is also a coral reef resident.

Another characteristic that the movie captures is Dory's awful memory! This is potentially something we see in the wild during breeding. Males become quite dominant of their territory to secure a breeding ground in the coral. The female release their eggs in the water just above the coral. Males then do the same with their sperm. The fertilised eggs then drop in to the coral which provides a good level of protection during the offspring's early days. Once the parents have fertilised the eggs, in the water, they simply swim away and take no further part in the raising of their offspring! What we do not understand is whether this is just bad parenting or whether what we see as Dory's bad memory in the movie is actually the case and the parents simply forget they have spawned or even have offspring to care for!

Another similarity we see between the movie and real life Regal Blue Tangs is their unique defence mechanism. If they feel under threat the fish will turn on its side and stop moving. Effectively, it appears the Regal Blue Tang plays dead! This is something we see Dory do during the movie.

Regal Blue Tangs are very striking visually and are an absolute pleasure to watch swimming around. As with all saltwater species, they are not straightforward creatures to care for and do demand specific conditions to thrive.

The main element which may see some hobbyists avoid keeping Regal Blue Tangs is the difficulty in breeding. Only a short time ago, in 2016, were Regal Blue Tangs first bred in captivity, and this was by experts in a major sea-life university in Florida. The main reason breeding is so difficult is because these fish require live coral for their breeding grounds alongside a very specific environment. This is not an environment that is easily replicated at home. Live coral is itself a living specie that requires careful maintenance and care. It is not impossible but does mean that providing the ideal environment for breeding does come with an added level of complexity. It would also appear that pH, water temperature and amount of light play a significant role in manifesting the perfect breeding environment.

The living conditions required for Regal Blue Tangs is also quite specific. To keep a single Regal Blue Tang you will require a tank that is a minimum of 75 Gallons. These fish like lots of space to swim and are on the move constantly. If you intend to keep more than one Regal Blue Tang then the size of the tank required does need to be a minimum of 100 gallons. For experienced hobbyists it is not uncommon to see tanks that increase significantly in size (up to 180 Gallons) to cater the for space that Regal Blue Tangs require.

These fish are considered mature by their size rather than their age. Mature at 12cm long, in the wild they can grow up to 12 inches long with adults weighing around 600gms.

As stated before Regal Blue Tangs do not tend to cohabit very well with other surgeon-fish however they do live alongside other species very well such as Yellow Tangs and Clown fish. If you are introducing more than one Regal Blue Tang to your tank, it is advised to introduce all the fish at the same time. This will avoid territorial aggression.

The life span of a Regal Blue Tang in the wild can be up to 30 years however in captivity this reduces significantly to around 8-12 years.

Live rock, such as coral is an absolute must in any aquarium for Regal Blue Tangs. This specie is one that keeps the coral clean by feeding on the algae that forms on the coral.

This leads to another area that needs to be considered if you want to keep these fish at home. The water quality and temperature are key elements to the success of keeping Regal Blue Tangs. The pH needs to be 8.1 to 8.4 and the water temperature needs to be 75-82 degrees Fahrenheit.

Running a full nitrogen cycle is critical to keeping this fish at home as the water needs to be super clean and a good environment for algae to grow on the coral. They will keep the coral clean by eating the algae with their tiny sharp teeth which a specifically designed to clear the coral. This keeps the coral clean and in turn the coral provides food and also the safe haven as the Regal Blue Tangs potential breeding ground.

Obviously, ensuring your coral has sufficient algae to feed your fish at home is not always easy but thankfully there are other foods your Regal Blue Tang can eat. Seaweed is also a very good food to help maintain a healthy immune system. A good source of seaweed, if not grown live in your tank, is the seaweed sheets used for making sushi. It is also suggested that this can reduce aggression in the fish. These fish are in fact omnivores and so will also feed on more meaty offerings that may be in your tank.

Regal Blue Tang males can be seen to be aggressive. This is mainly during breeding where they can battle for their breeding ground over the coral. They are often seen 'jousting' where they fight using their razor sharp tail spines. If a human were to handle these fish there is also a danger that you could receive a nasty nip from their spines.

These fish tend to be kept by experienced hobbyists as they are quite particular in their care however with sufficient research and understanding, as a new hobbyist, a single Regal Blue Tang is an awesome addition to any saltwater aquarium.